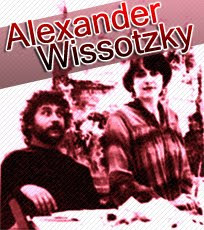 Artworks signed, “Alexander Wissotzky” are actually collaborative works by a husband and wife team – Alexander Galtchansky and Tanya Wissotzky. The couple met in art school – Alexander pursuing a career in illustrating books and Tanya in painting. After falling in love and getting married, they emigrated to Israel where they found themselves feeling the estrangement caused by living in a foreign land. The new and challenging environment drew them to each other. They started working together to create grand, still life masterpieces that incorporate references to old English culture.

During their artistic collaborations, their love for each became more and more apparent in their works. They gained critical acclaim across the world. In the United States, Israel, Sweden and Germany, some of their most remarkable works are part of large public and private collections. Their relationship is an example of a love truly expressed on the canvas. Come into Baterbys today and own a Symbol of Their Love.