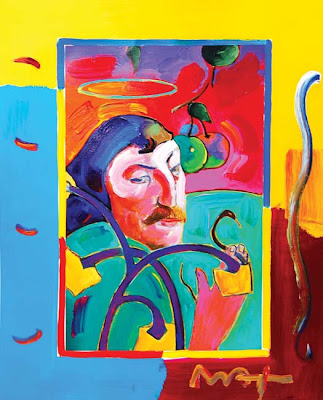 If one movement begets another movement and so on and so forth, then Post-Impressionism was begotten from Impressionism. Just as an estranged child evolves beyond their parents accomplishments, Post –Impressionism veers away from Impressionism by pushing the envelope to attain more structure, expression and emotions into their paintings.
Post-impressionists, who began to make their mark in the art world in the late 1800’s and early 1900’s, believed that color could be independent from form and composition by being more emotional and artistic – like telling the story in a different light. The similarities between the two movements can be found in the subject matter, the characteristic brushstrokes, vibrant hues and thick coatings of paint. Post-Impressionism focuses on the personal experience as an artist, unlike the devotion to the object like in Impressionism. The style of the work; the development of a new technique of paint application; or being able to see the piece from several angles, were factors more important than the subject matter.
One of the leading forerunners of this movement was Paul Gauguin (1848-1903). Originally a painter by hobby, he became an avid collector of impressionistic artworks after his own work was accepted into The Solon of 1876. Gauguin exemplified the discontentment with middle-class existence felt by several post-impressionist painters.
Some years later, as his need to create became stronger, he decided to give up his comfortable lifestyle in Paris and relocate to Tahiti where he could devote himself solely to painting. Preferring to live among the natives who were uninfluenced from the “western world’s” advancements, he was able to explore his talent in the true post-impressionistic belief. His lifestyle eventually evolved into more of a bohemian existence.
Though Gauguin did not see much success during his lifetime, he is regarded today as the highly influential founder of Post-Impressionism and ranked amongst other recognizable names in the movement such as Pierre Bonnard (1867 – 1947), Henri de Toulouse-Lautrec (1864 – 1897) and Vincent van Gogh (1853 – 1890).
Post-impression gave rise to other art movements which eventually also paved the way for other Modern Art movements such as Fauvism; from Fauvism, Cubism; and from Cubism, Expressionism emerged – all these movements transitioned into the next like overlapping genres.
These movements were named to represent the era in which they were pioneered, allowing artists to draw inspiration from one another. Master artist, Peter Max, paid homage to the late Paul Gauguin by duplicating Gauguin’s self-portrait, recreating the same Post-Impressionistic DNA that was captured over 50 years earlier by the great master. Although similar to the original creation by Gauguin, Max expressed his talent and repainted the piece in the way he saw it: full of rich and bright colors, like a true neo-expressionist.
Creativity is in an artist’s blood. They love their work, and their creations. Artists create because it is within every pore and fiber of their body. Such passion cannot be locked into an idea or a movement, but to be expressed upon their medium of choice. No matter the movement, Art is Passion.