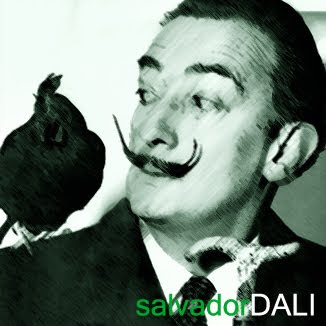 There is so much controversy that surrounds Salvador Dalí – his life, his love, his personality…

“I am not strange, I am just not normal.” Salvador Dalí was born on May 11, 1904 in Figueres, Spain. One would assume that he was born to normal, average parents. When Dalí was five years old, he was taken to a grave site and was told by his parents that he was his brother’s reincarnation. This was a theory that he came to believe (Dalí’s brother, who died nine months prior his birth, was also named Salvador).

Of his brother, Dalí said, “… [we] resembled each other like two drops of water, but we had different reflections.” He “was probably a first version of myself but conceived too much in the absolute.”
At sixteen, Dalí lost his Mother to breast cancer. He later said his mother’s death “was the greatest blow I had experienced in my life. I worshipped her… I could not resign myself to the loss of a being on whom I counted to make invisible the unavoidable blemishes of my soul.” After the death of his Salvador’s Mother, His father, Don Salvador Dalí y Cusi, married his deceased wife’s sister in which Dalí did not begrudge, because he had a respect and admiration for his aunt.

“There is only one difference between a madman and me. The madman thinks he is sane. I know I am mad.” While in his youth, Dalí drew attention as an eccentric and well-dressed man. He had long hair and kept sideburns and he wore a coat, stockings, and knee breeches in the style of English Art connoisseurs of the late 19th century. Salvador grew a flamboyant mustache influenced by seventeenth-century Spanish master painter Diego Velázquez. The mustache became an iconic trademark of his appearance for the rest of his life. As his personal artistry evolved, Dalí wore a cape, carried a cane, waxed his mustache upwards, and kept a haughty expression among other unique personality traits. He also referred to himself in third person believing he was immortal.

“Happy is he who causes a scandal.” In early August 1929, Dali met the woman who would be the driving force behind his career. Elena Ivanovna Diakonov, or “Gala” as they called her, was associated and married to the Surrealist poet Paul Éluard. Prior to their meeting, she was associated with the surrealists and was considered a muse by many artists in the movement. Éluard and Gala visited the young painter in Spain, where an affair blossomed between the pair; she left her then husband, Éluard, and daughter to be with the Dali, ten years her junior.

When Dalí met Gala he fell in love with her on, she was coined as Dalí’s muse, business manager and chief inspiration. In his Secret Life, he wrote: “She was destined to be my Gradiva (the name comes from the title of a novel by W. Jensen, the main character of which was Sigmund Freud; Gradiva was the book’s heroine and it was she who brought about the protagonist’s psychological healing), the one who moves forward, my victory, my wife”.

Gala had relations with a number of intellectuals and artists including her ex-husband Éluard. She was able to recognize artistic and creative brilliance when she saw it and therefore invested herself in partnering with Dalí in terms of putting his name on the map of the art world. Likewise, Dalí was alleged lovers with Spanish poet Federico Garcia Lorca. But it was Gala who remained ever thereafter at the painter’s side. Therefore, it was Gala with whom Dalí did not want to live without.

“Surrealism is destructive, but it destroys only what it considers to be shackles limiting our vision.” Meanwhile, Dalí’s relationship with his father was close to ruin. Don Salvador Dalí y Cusi strongly disapproved of his son’s romance with Gala and saw his connection to the Surrealists as a bad influence on his ethics. The last straw was when Don Salvador read in a Barcelona newspaper that his son had recently exhibited in Paris a drawing of the Sacred Heart of Jesus Christ, with a provocative inscription: “Sometimes, I spit for fun on my mother’s portrait.” Outraged, Don Salvador insisted that his son recant publicly but the artist refused and was violently thrown out of his paternal home in the winter of 1929.

Dalí participated in several surrealist group shows in the 1930s, despite differences with surrealism’s founder, André Breton. Dalí insisted that surrealism could exist in an apolitical environment and refused to explicitly criticize Fascism. Among other issues, this had landed him in trouble with his peers. Later in 1934, Dalí was subjected to a “trial”, in which he was formally expelled from the Surrealist organization.

To this, Dalí responded, “I myself am surrealism.” Dalí finally parted ways with the surrealists in 1939 after declaring his support for Spanish dictator Franco. He had progressed into a more naturalistic style, influenced by his admiration for renaissance art. Dalí had achieved recognition in his own country, and his father had come to accept his son’s relationship with his wife, Gala.

Dalí’s health began to fail after the death of his wife in 1982 and he was injured in a fire at his home two years later. At the end of his life he became almost a loner, dying in 1989.

…We may not all agree with Salvador Dalí’s lifestyle and choices. But let us appreciate the fact that he was a creator and an innovator in his own right. Who he was made him who is and I believe someone’s beginning can defiantly define their ending.