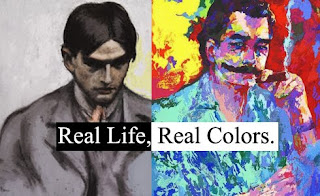 The work of Everett Shinn and Leroy Neiman vastly differ in their aesthetics, artistic styles and most obviously, their color compositions. Neiman uses a wider spectrum of lively and vivid colors in his paintings, deliberately executing this aspect of his work from both naturalistic and symbolic standpoints.

“I do not depart from the colors borrowed from life. But I use color to emphasize the scent, the spirit and the feeling of the thing I’ve experienced. The behavior and interplay of these colors determine the psychological impact of the painting”, says Neiman about his prolific use of colors.

Neiman’s approach to his work always consists of this polarity: using colors to represent what he sees and to illustrate how people (including himself) project their subjective feelings on the outward world. It’s always a mix of what is concrete and real and what is abstract and inwardly felt. Images of athletes are painted over electric green and neon yellow backdrops, accentuating the both the light of the natural environment their competing in and the intangible energy exploding from their bodies.

Everett Shinn, on the other hand, though more popularly known for his use of glamorous and gritty elements, paints his subjects under a darker light – literally and figuratively. Subdued in darker hues, Shinn has made a name for himself illustrating the hard life in the big city. Brawls, crimes, poverty and degradation are some of his subjects. Using the same color palette, he ironically paints the glitzy nightlife: theaters, opera houses, orchestras and ballet performances.

The clusters of the subjects he chooses fall on opposite ends of life in the big city. He paints them though with the same clarity of thought as if to say, “it is what it is”. Though he publicly admitted a stronger preference to paint the glamorous over the gritty, he still manages to underlay the scenes with darker tones of color that evoke certain pangs of loneliness, solitude and an almost haunting mystery interspersed within the very superficial context.

“It’s just that the uptown life with all its glitter was more good-looking… Ah, the clothes then, the movement of the satins, women’s skirts and men’s coats and swish of wild boas, oh Lord.”, says Shinn.

Both artists experienced the polarities of living in the big city, claiming to be “realist” painters who simply rendered onto the canvas what immediately caught their eyes in their surroundings. Neiman himself confessed being influenced by the work of Shinn and the Ashcan School of Painters he was a part of. They were both engrossed in the same mainline life of people and their daily activities as their subject matter.

The achievements of these two artists are distinct because of their artistic integrity. Neither of them shied away from what they saw and how they felt about life with its varying colors and moods. With their thick brush strokes, dollops of oil paints and stretch of canvasses, life was illustrated as it is: colorful, yet dark at times; conspicuous and simultaneously, mysterious.

Both artists are featured in the upcoming Discovery Consignment Auctions.